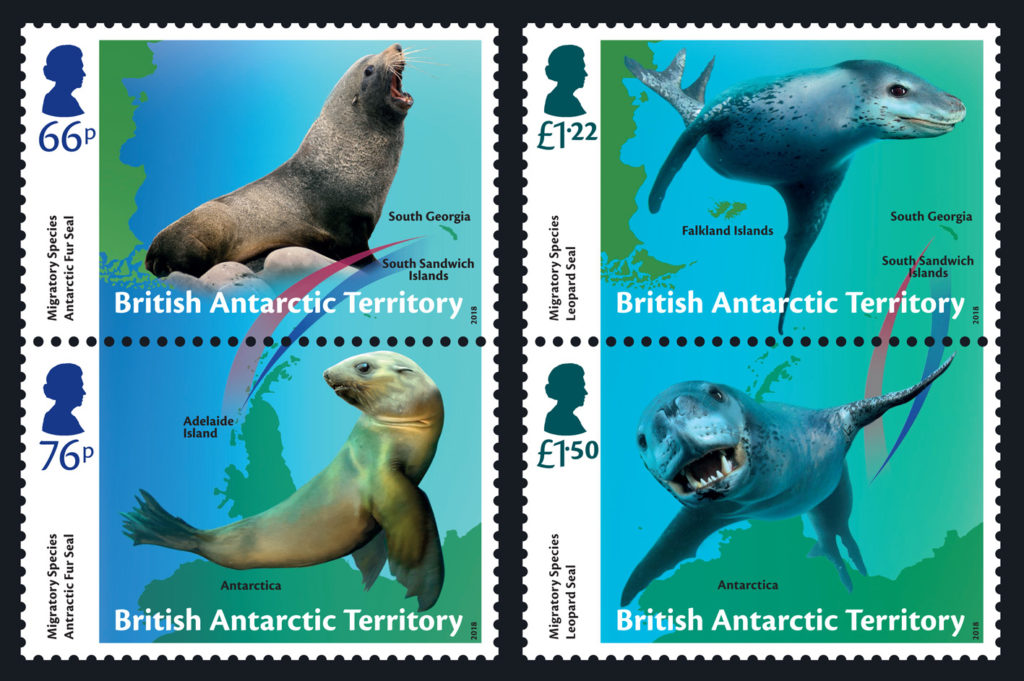 Our Migratory Species stamp set is one of a complimentary suite of stamps being issued in 2018 by UK Overseas Territories including Ascension Island, Falkland Islands, South Georgia and South Sandwich Islands and Tristan da Cunha.

The globe is criss-crossed with borders and boundaries, designating countries and states each with its own culture, identity and regulations. However, these geopolitical borders were created by humans for humans and animals follow their own geography, wonderfully oblivious to the way we have divided up their world.

Animals often require different habitats and environmental conditions for mating, breeding and feeding and so migrate between areas in order to find the resources they need. Some migration routes are relatively short, perhaps just between one side of a mountain range to another, but some species will travel for thousands of miles. A wide range of animal groups make such mammoth migrations; including birds, mammals, fish, invertebrates and reptiles. Species which make these epic journeys have adapted to time their movements in response to external and internal cues. External cues include a range of environmental signals; including day length, local climate and availability of food. While internal cues may include body condition or the bodies internal, circadian, rhythms. Once they are underway, animals may navigate with the aid of the sun, stars, magnetic fields, winds, currents and even smell, however, the exact mechanisms remain unknown in many animals. Whether by instinct or learned group experience individuals can follow the same routes and return to ancestral breeding and feeding grounds year on year.

Because of the large distances, the different habitats and the multiple National borders through which they pass, conserving migratory species presents a particular challenge. The first difficulty is tracking species to find out where they actually go. The advent of modern satellite tracking devices has made this a little easier but even then attaching a tag to wild animals, sensitive to human disturbance, is not always straightforward. Even once a migration route is known, countries along that route need to agree shared conservation goals and enact them under their local policies and procedures. If a conservation threat persists at just one step along the way, the species is put in jeopardy so it is imperative that nations work together.

To help facilitate the conservation of migratory species, a number of global platforms exist including the Convention on Migratory Species (CMS), which is an environmental treaty under the umbrella of the United Nations Environment Programme. First signed in Bonn in 1983, this year the Convention celebrates its 35th anniversary. Outside of formal agreements like the CMS, countries work together through a variety of conservation programmes and non-governmental organisations. Conservation initiatives that benefit migratory species include promoting sustainable habitat conservation, policing illegal trade, by-catch prevention and reducing disturbance from marine noise.

Antarctic fur seals are eared seals similar to sea lions in that they can walk on their flippers when on land. At the turn of the 19th century they were hunted to near extinction for their highly prized dense fur. Over the last 100 years they have made a remarkable recovery to number in the millions although they are now vulnerable to the climatic changes being seen in the Antarctic. Ninety-five percent of the world’s population are found on South Georgia where they come ashore to breed. Females give birth in December and then spend the summer months alternating trips to sea to feed, with time spent on land suckling their pups. In contrast, tracking by the British Antarctic Survey has shown that males, after mating in December, migrate southwards to the edge of the sea ice and the Antarctic continent to recover after spending several weeks fasting while fighting for territories and access to females. One individual reached Adelaide Island on the Antarctic Peninsula a trip of over 1,500 miles. In April, after their pups have weaned, females disperse at sea during the winter months and have been tracked as far north as the coast of Brazil.

With their large mouths and impressive teeth leopard seals have a reputation as fearsome hunters reaching lengths of 3.5m and weighing up to 600kg. While they are one of the top predators in the Antarctic, feeding on penguins, fish and young seals, the majority of their diet is actually made up of Antarctic krill. They typically breed and feed within the sea ice region surrounding the Antarctic Continent but, research by the British Antarctic Survey has shown that during the colder winter months, a proportion migrate northwards to Sub-Antarctic islands such as South Georgia. Indeed they are occasionally seen further north around the Falkland Islands, Australia and Patagonia. They are very vocal animals and ‘sing’ producing deep booming sounds coupled with high pitched trills that are believed to be related to breeding. Individuals can be identified from their song patterns and also using the unique pattern of spots on their fur, from which they get their name.