Marking 200 years since the discovery of Antarctica, the British Antarctic Territory is delighted to present this commemorative stamp set.

Since discovery, Antarctica has had a chequered past. Once news of these new lands was known, exploitation of its abundant seal population began almost immediately; later it was whalers that would exploit the Antarctic environment. While the animals of the Southern Ocean were devastated by those seeking profit others were drawn by the challenge of exploring the great white continent and conquering its imposing interior. During the 20th century, the focus of human activity in Antarctica shifted to a new form of exploration, as scientists began to study the continent and steps were taken to protect the Antarctic’s biodiversity. Today, as we begin to understand even more about the global importance of this near pristine environment, we redouble our efforts to understand it and protect it for future generations.

19 February 1819 marked the first sighting of land south of 60° latitude. The British Master Mariner, William Smith, sighted what is known today as the South Shetland Islands. He was on board his ship Williams which is depicted in the first of this three-part stamp set. Built in Blyth, the Williams was then a state-of-the-art sailing vessel. After having been ridiculed for his discovery by non-believers, Smith reached the Islands again and on 16 October 1819 made the first recorded landing on Antarctic territory.

This was not the end of the Williams or Smith’s role in the discovery of Antarctica. Commissioned by the Royal Navy to return to Antarctica under the command of Edward Bransfield, an Irish-born Royal Navy navigator, Bransfield sighted land on the Antarctic Peninsula on 30 January 1820. However, three days prior, on 27 January 1820, a Russian expedition led by Fabian Gottlieb van Bellingshausen sighted an ice shelf and is widely credited with being the first to see the Antarctic continent. General consensus among Antarctic historians is that Bellingshausen saw what is known today as the Fimbul ice shelf, making this the first sighting of the continental landmass. He may well have also sighted land, but Bransfield was the first to record this clearly.

The consequence of discovery was almost immediate exploitation. Sealers were already working around the South Americas, Falkland Islands and South Georgia and once news of an abundant population of seals was known, within just four seasons in the South Shetland Islands, almost all the fur seals had disappeared. The whaling industry arrived some years later, wreaking an equally devastating impact on the Southern Ocean.

The exploits of Smith and Bransfield were also the catalyst for a wave of exploration, with British expeditions led by James Weddell and James Clark Ross. The “Heroic age” of Antarctic exploration is considered to have begun in 1895. This is when a resolution advocating the exploration of Antarctica was passed at the sixth International Geographical Congress.

The first official British exploration of the Antarctic for 60 years was in 1901. The Discovery Expedition (1901-1903) was organised by the Royal Society and Royal Geographical Society and led by Robert Falcon Scott. The main purpose of the expedition was scientific – to make magnetic surveys and carry out meteorological, oceanographic and biological research.

Another aim was to reach the South Pole, or at least to explore further south than anyone had previously managed. The core party consisted of Robert Falcon Scott, Ernest Shackleton and Dr Edward Wilson. These are pictured in the second stamp of this set. It took until 1911 for the Norwegian Roald Amundsen to reach the South Pole, famously beating Scott.

Many other expeditions have taken place since, each contributing to the records and knowledge that we have today.

During the 1940s and 1950s, Antarctica was the subject of international tension. This was due to overlapping sovereignty claims and tensions of the Cold War. To address this, the Antarctic Treaty was signed in Washington on 1 December 1959. It preserves the Antarctic continent for peaceful and scientific use. Further Conventions and Protocols have been agreed to address the issues of Antarctic resources and protection of the Antarctic environment.

Antarctica continues to face huge challenges. The Antarctic Peninsula is one of the fastest warming regions of the planet. Plastics and heavy metals are now being found in Antarctica in increasing volumes. In a recent paper led by the Grantham Institute, Imperial College, reveals that a temperature increase of 1.5°C in the Peninsula would see: increased rain and snow; acceleration of glacial retreat which would produce more icebergs; changing distribution of wildlife and an increase threat from non-native species.

The Emperor Penguin – arguably the symbol of Antarctica and featured in the third stamp – is a species threatened by loss of its breeding habitat with active consideration being given to better protect this iconic Antarctic species. 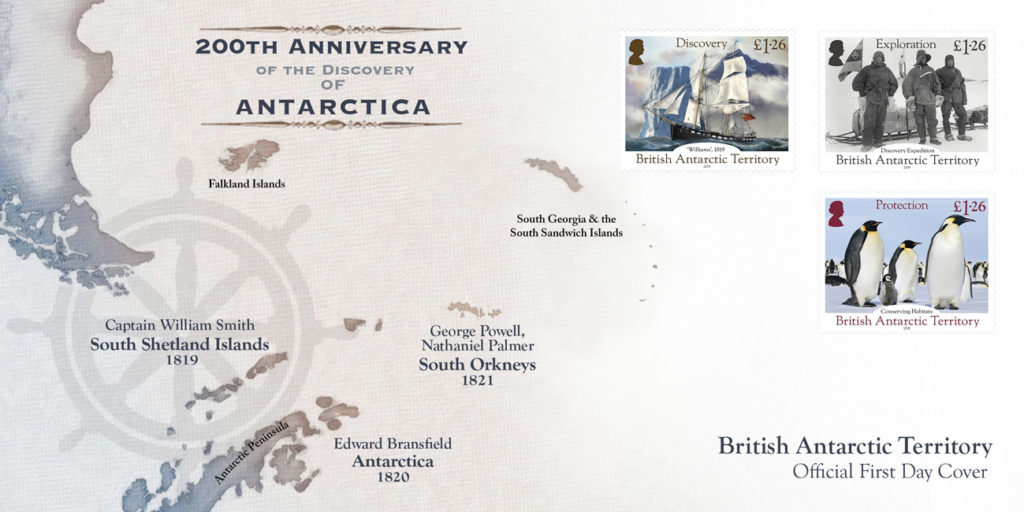