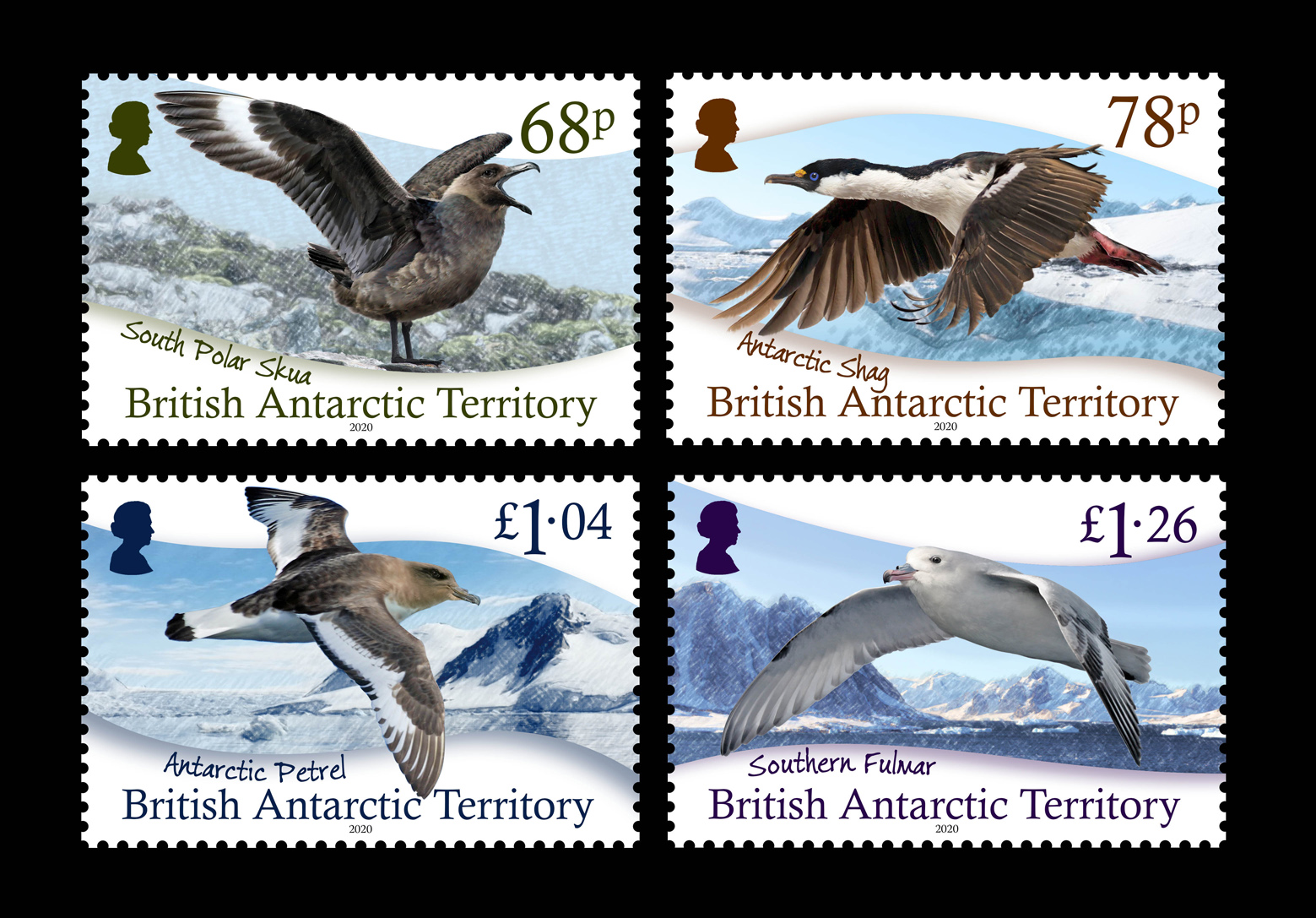 Adaptations of polar seabirds for survival in their extreme environment include dense plumage for insulation and a countercurrent heat exchange system to stop their feet freezing. All species in this stamp issue breed at very high latitudes, and three of them – the snow petrel, Antarctic petrel and south polar skua – are recorded visiting the Geographic South Pole. It is one thing for a seabird to thrive in Antarctica in the austral summer when there is abundant food in coastal waters and 24-hour daylight, but quite another to tolerate the intense cold and darkness of the austral winter. However, only some spend their nonbreeding season in much warmer climes.

The snow petrel, Antarctic petrel and southern fulmar are in the order Procellariiformes (tubenoses), which have evolved unique adaptations associated with oceanic lifestyles involving foraging trips of 100s and sometimes 1000s of km from colonies during breeding. Adults produce stomach oil by partial digestion of prey, and so can transport enough energy to the chick despite long intervals between feeds. The oil also provides excellent defence when regurgitated, as most predators are avian and the oil causes matting of the feathers, reducing waterproofing and flight capability.

Dainty and with all-white plumage, the Snow Petrel is many people’s favourite Antarctic seabird. It breeds colonially on Antarctic islands and sometimes – like the Antarctic petrel – 100s of kilometres inland on nunataks (exposed rocky peaks and ridges above the ice sheet). Where there is little precipitation, deposits of regurgitated stomach oil build up just outside the entrance to crevices, analysis of which can reveal occupation histories of these sites and patterns of glaciation stretching back tens of thousands of years.

The South Polar Skua breeds on islands close to the Antarctic continent and feeds at sea, mainly on Antarctic silverfish, or penguin colonies, but the latter only where there are no sympatric brown skuas (which are much larger and would dominate in disputes over prey). South polar skuas are exceptional long-distance migrants and have diverse strategies; birds tracked from the same colony in the South Shetland Islands included transequatorial migrants to various regions in the North Atlantic or North Pacific Oceans, and a small proportion wintered in the southern hemisphere.

The Antarctic Shag, now usually considered a separate species within the blue-eyed shag species complex, is the only cormorant found at very high latitudes. It is a coastal species and non-migratory, but is often forced away from breeding colonies in the austral winter to roosting sites close to the ice edge in order to feed in open water (and in 24-hour darkness). Unlike most Antarctic seabirds, this species feeds predominantly on fish and not krill, and are by far the best diver of the flying seabirds, reaching a maximum depth of around 60 m.

The Antarctic Petrel is another species with a very high-latitude breeding distribution in coastal Antarctica. High densities found in ship-based surveys in the Weddell and Ross Seas suggest a world population that far exceeds that known from land-based surveys, i.e. huge colonies may remain undiscovered. Clues to their whereabouts can be provided by satellite remote-sensing used to detect the unique spectral signature of guano, allowing seabird colonies to be discriminated from background geology.

The Southern Fulmar is closely related to the familiar northern fulmar of the North Atlantic and Pacific Oceans, and is just as widespread but at the opposite end of the globe. Its stiff-winged fluttering interspersed with long glides, and unique silhouette make it easy to identify at sea. Like most Antarctic seabirds, southern fulmars eat mainly krill and fish, and occasionally squid, which they obtain at the sea surface or within a few metres depth.