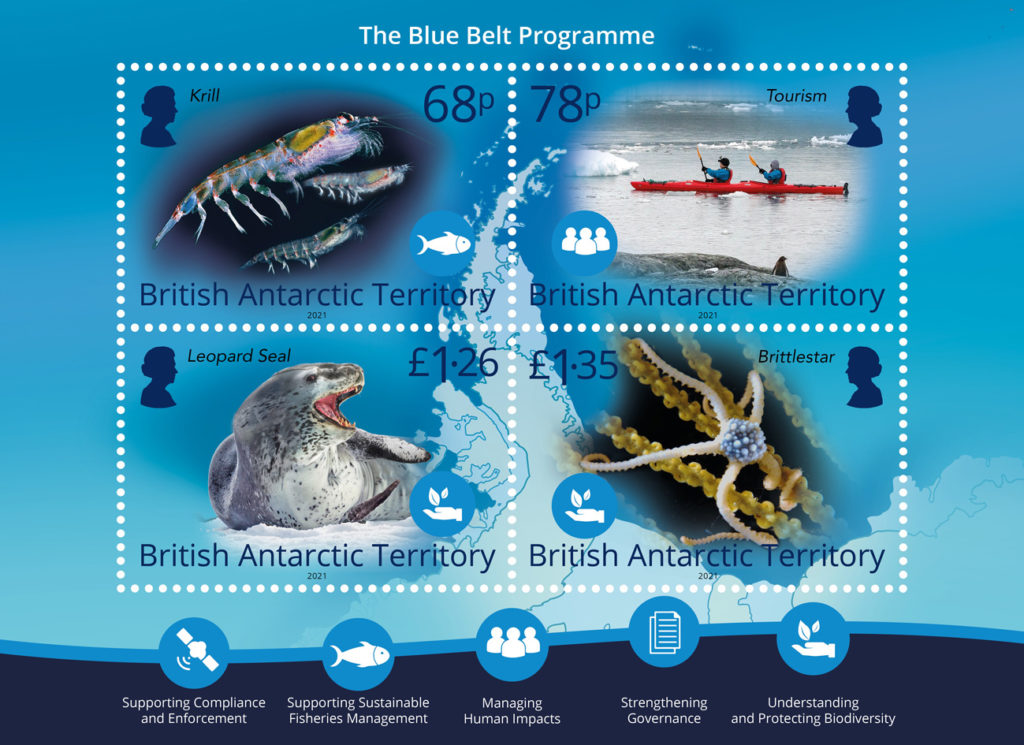 The UK Overseas Territories (OTs) are home to globally significant biodiversity. The UK Blue Belt Programme recognises this, and since 2016 has worked with the Governments of these Territories to enhance the protection of these precious marine environments.

The Blue Belt Programme helps UK OTs and the UK work together to improve understanding of the effectiveness of Marine Protected Areas (MPAs) and how to improve them. This work is supported by two world leading organisations – the Centre for Environment Fisheries and Aquaculture Science (Cefas) and the Marine Management Organisation (MMO).

The waters around the British Antarctic Territory are amongst the most productive in the Southern Ocean, supporting large populations of krill, which feed larger predators, like baleen whales, penguins and seals. The Blue Belt Programme supports scientific understanding of the British Antarctic Territory, which is vital in developing climate-smart management. The programme has contributed valuable data to the management processes of the Commission for the Conservation of Antarctic Marine Living Resources (CCAMLR), which is responsible for marine protection and fisheries management around Antarctica. Through the development of sophisticated surveillance methods, we are better able to assess, and deter, the threat of illegal, unregulated and unreported fishing across the Southern Ocean.

Krill is an important food source for many Antarctic predators. As part of the krill fishery management, their population status and foraging habits are continually monitored and management steps taken to reduce competition. The UK works in CCAMLR to ensure krill populations are conserved.

All human activity in Antarctica is carefully planned to enable well-managed, environmentally sensitive tourism alongside scientific endeavour and exploration.

The British Antarctic Territory works to protect the Southern Ocean and the multitude of animals that depend on it for food. Leopard seals, named after their leopard-like spots, are fearsome predators. They are the largest of the true Antarctic seals and the only seals which eat other seals.

Improving understanding of biodiversity is a key objective of the Blue Belt Programme. More than 6,000 different species have been identified living on the floor of the Southern Ocean and more than half are unique to Antarctica. One of these is the Astrohamma tuberculatum, a type of Antarctic brittlestar or snake star.