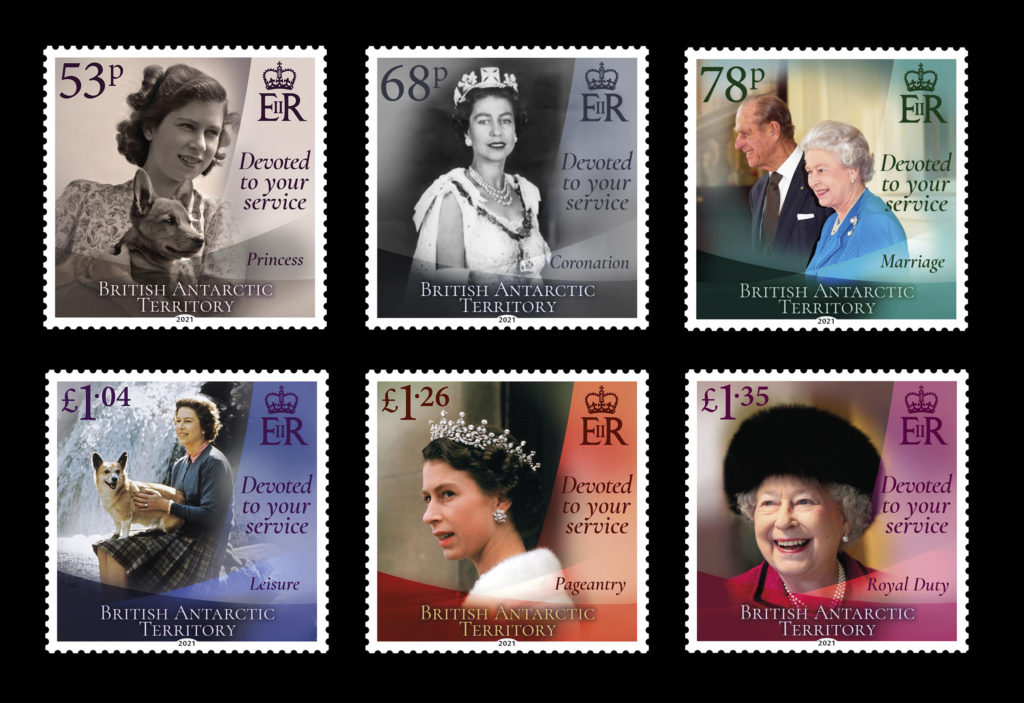 The Government of the British Antarctic Territory is pleased to release a set of six stamps and a souvenir sheet in celebration of Her Majesty The Queen’s 95th birthday.

Her Majesty celebrates her 95th birthday on 21 April 2021. The British Antarctic Territory and ten other postal administrations have agreed to co-operate in a fitting tribute to Her Majesty, each issuing a set of six stamps featuring carefully selected photographs of a life that has been filled with dedication and devotion.

The stamps recall a speech made by the Queen to the Commonwealth on her 21st birthday during a visit to South Africa. In that speech she made the pledge ‘I declare before you all that my life, whether it be long or short, shall be devoted to your service and the service of our great imperial family to which we all belong’. Every stamp carries the message ‘Devoted to your service’, each focusing on an aspect of Her Majesty’s life: as a Princess; her Coronation in 1953; her Marriage to Prince Philip; her times of Leisure; occasions of Pageantry; and throughout it all, her profound sense of Royal Duty.

As a symbol of the eleven countries coming together, a sheet has been specially created that includes one design from each of the participants: Ascension Island, The Bahamas, British Antarctic Territory, British Virgin Islands, Falkland Islands, Guernsey, Gibraltar, The Isle of Man, Jersey, South Georgia & the South Sandwich Islands, and Tristan da Cunha.

The Princess Elizabeth is pictured holding a corgi in the grounds of Windsor Castle, 30 May 1944. (Photo by Lisa Sheridan/Studio Lisa/Getty Images).

The Queen and Prince Philip say farewell to the Italian President and his wife as they depart Buckingham Palace at the end of their State Visit on March 17, 2005.  (Photo by Tim Graham Photo Library via Getty Images).

The Queen sitting on rocks beside a waterfall on the Garbh Allt Burn with a corgi on her lap. The photograph was taken on the Estate at Balmoral Castle, Scotland during the Royal Family’s annual summer holiday in September 1971 and was part of a series of photographs taken for use during the Silver Wedding Celebrations in 1972. (Photo by Lichfield Archive via Getty Images).

During the 1954 Royal Tour of Australia, Queen Elizabeth II is pictured leaving the State Opening of Parliament at Parliament House, Hobart. (Photo by Popperfoto via Getty Images/Getty Images).

The Queen laughs as she is taken on a tour of the Carole Brown Health Centre in Dersingham, Norfolk in February 2009. (Photo by Chris Jackson/PA Archive/PA Images).

The FDC features two images of Her Majesty; a contemporary picture of the Queen who is fondly known throughout the world and a beautiful portrait, circa 1929, of the young Princess Elizabeth before it was realised that she would be acceding to the throne. (Photos via Getty Images).