To celebrate the 30th Anniversary of Environmental Protocol, the British Antarctic Territory and Pobjoy Mint will be issuing two coins which feature two of Antarctica’s most renowned residents.  For our first issue, we are proud to present a £2 coin which displays a delightful Ross Seal with its pup. The Ross Seal was listed as a Specially Protected Species in Annex II (Flora & Fauna) of the Protocol. 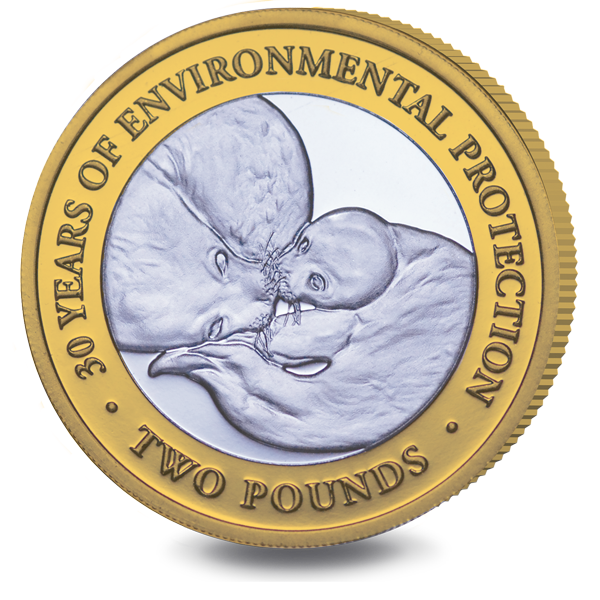 The Protocol was signed in Madrid on 4th October 1991 and entered into force in 1998. It designates Antarctica as a ‘natural reserve, devoted to peace and science’. Article 3 of the Environmental Protocol sets out basic principles applicable to human activities in Antarctica and Article 7 prohibits all activities relating to Antarctic mineral resources, except for scientific purposes.

Protection of native flora and fauna has been a concern for the Consultative Parties to the Antarctic Treaty since the beginning. Article 3.2 of the Environmental Protocol provides that activities to be undertaken in Antarctica shall be planned and conducted as to avoid ‘detrimental changes in the distribution, abundance or productivity of species or population of species of fauna & flora’ and ‘further jeopardy to endangered or threatened species or populations of such species’.

Annex II to the Protocol sets out specific measures to give effect to this and provides several different mechanisms to protect Antarctic species including: the prohibition of taking (removing) and of harmful interference, except in accordance with a permit; restrictions on the introduction of non-native species, except in accordance with a permit; and the designation of Specially Protected Species.