The British Antarctic Territory and Pobjoy Mint are delighted to announce the release of a brand new £2 coin to celebrate 100 years since the end of the Heroic Age of Antarctic Exploration. 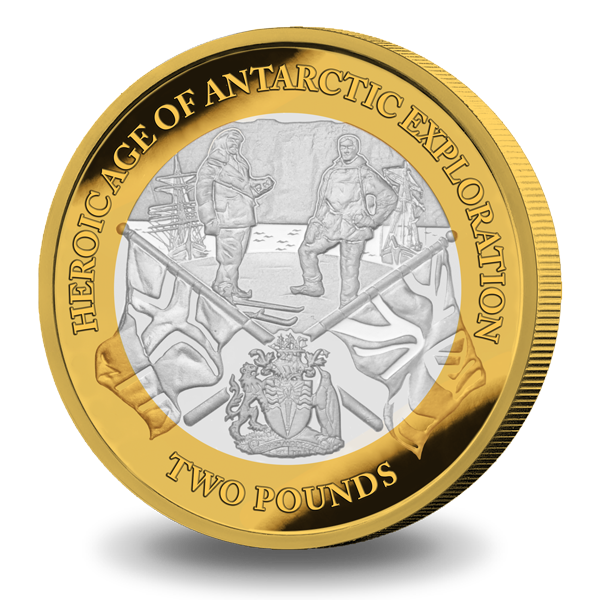 At the end of the 19th Century, Antarctic exploration would have been considered the equivalent of how Space Exploration is perceived today. Exploring this “Terra Incognita” had been an off-and-on area of interest for centuries prior to the Heroic Age, and was regarded as being at the limit of possibilities, due to the sheer isolation and inhospitable climate of the region. Yet determined individuals mounted their expeditions, thus creating what we now know as The Heroic Age of Antarctic Exploration.

During this Heroic Age, the Antarctic region was the focus of international efforts that resulted in intensive scientific and geographic exploration by many expeditions launched from several countries.  The common factor in these expeditions was the limited nature of the resources available to them before advances in transport and communication technologies revolutionised exploration.  Each expedition was therefore a feat of endurance that tested, and sometimes exceeded, the physical and mental limits of its personnel.  The “heroic” label, recognises the adversities that were overcome by these pioneers.

The Southern Cross Expedition, otherwise known as the British Antarctic Expedition, 1898–1900, was the first British Antarctic venture of the Heroic Age of Antarctic Exploration, led by Anglo-Norwegian explorer Carsten Borchgrevnik, and was the forerunner of the more celebrated journeys of Robert Falcon Scott and Ernest Shackleton. Sir Ernest Shackleton ventured on his last Antarctic project on the expedition ship Quest. With the original intention of exploring the Beaufort Sea in the Arctic, this plan was abandoned and thereupon switched to an exploration of the Antarctic. This coin is a fitting start to this series as the Heroic Age of Antarctic Exploration is thought to have begun with Borchgrevnik’s expedition on Southern Cross and ended with Shackleton’s expedition on Quest.

The design features Carsten Borchgrevnik with the Southern Cross on the left, and Ernest Shackleton with the Quest on the right, with an iceberg in the background. The Norwegian flag and the Union Flag appear below the explorers, with the Coat of Arms of the British Antarctic Territory appearing below the flags. The coin has been produced in Bi-metal and Proof Fine Silver with Goldclad®.