Hot off the mint is the new 50p coin featuring the classically comical Adélie Penguin. This is the first in a set of five coins to be released by Pobjoy Mint this year.

Where can I buy it I hear you cry!  New releases such as this delightful coin and others can be purchased from Pobjoy Mint and all good coin stockists. 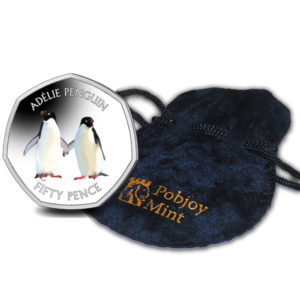 And now for the educational bit…

Adélie penguins, named after the wife of Dumont d’Urville, the French Antarctic explorer, are the most southerly of Antarctic penguins after the Emperor penguin. This hardy species are built to survive the extreme cold conditions of Antarctica because of their insulating fat layer and densely packed feathers. Don’t be fooled by their diminutive stature – these little seabirds are robust and very powerful indeed.