This year marks the 60th Anniversary of the entry into force of the Antarctic Treaty – recognised as one of the most successful international agreements, setting an example of peaceful cooperation. Pobjoy Mint have released a new £2 coin for 2021 featuring a map of Antarctica with four Emperor Penguins standing on the land. 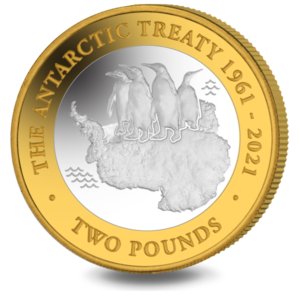 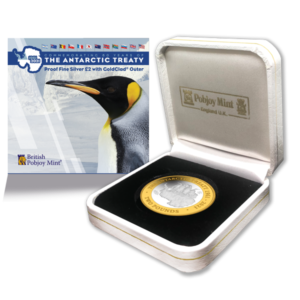 There are very few places on this planet where there has never been war, where the environment is fully protected and where priority has been given to scientific research. Antarctica is one such place, a whole continent that the Treaty Parties have designated as a “natural reserve, devoted to peace and science”.

Originally signed on 1st December 1959 in Washington by the twelve nations that were active in Antarctic science at the time, the Treaty came into force on 23rd June 1961. It has since been acceded to by many other nations, and there are now 54 Parties to the Treaty.

The Treaty itself is succinct but effective. Among its 14 articles, the Treaty stipulates that Antarctica should only be used for peaceful purposes; it guarantees the continued freedom to conduct scientific research, and promotes international scientific cooperation, setting aside disputes over territorial sovereignty.

60 years since the Treaty entered into force, the Parties remain committed to a system that protects Antarctic interests and allows science to give us the ability to monitor the impacts of climate change – an important issue that affects the whole of this planet.

Help mark this anniversary by ordering this new coin from Pobjoy Mint.