The British Antarctic Territory is home to a diverse array of wildlife. Our latest coin release features the Barbeled Antarctic Plunderfish (Artedidraco skottsberg) which is found in the waters around the Antarctic continent from the near-shore to depths exceeding 600m. It is one of around 25 species of small predatory fish in the family Artedidraconidae that are found only in the Southern Ocean. 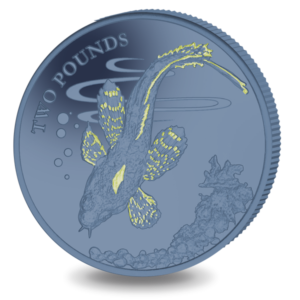 It eats a wide variety of small invertebrates found on or near the sea floor including crustaceans, plychaete worms and hydrozoans. In common with many Antarctic fish species, it produces antifreeze glycoproteins that allow them to occupy freezing habitats unavailable to most other fishes.

One of the more remarkable features of this particular fish is that its scales have UV properties which means that it glows brightly under UV light and it is the replication of this effect of the coin that makes it unique and very special. Produced in dark blue Titanium, the coin has undergone a further process to highlight some of the scales on the design with special ink so that the coin itself will glow in the dark.

The British Antarctic Territory is ...