Three years ago I joined the Polar Regions Department as the ‘Desk Officer for Antarctica and the British Antarctic Territory’ at the UK Foreign & Commonwealth Office.  Little did I know quite how varied the role would be and how much I would enjoy getting to know more about this unique region.

As my stint in the team comes to an end I have reflected on what I have learned.

Whether it’s been working on a Boaty McBoatface 50p coin, reviewing legislation or helping process applications for couples to get married, the job has been fascinating and most importantly all the people I have met along the way have been great to work with.

If you get the opportunity to work, visit or learn more about Antarctica, then go for it.  In the meantime, I seem to have become a new collector of stamps and coins so I’m off to review my collection! 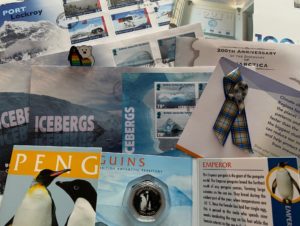 Eleanor joined the FCO in June 2001 and has previously worked on areas including Consular, South Asia and Migration. Roles in the Polar Regions Department are only available to existing civil servants.