The second coin in the five-part Penguin 50p series has been released by Pobjoy Mint, and features the Chinstrap penguin.

You can get your hands on the coin direct from Pobjoy Mint while stocks last or from all good coin stockists. 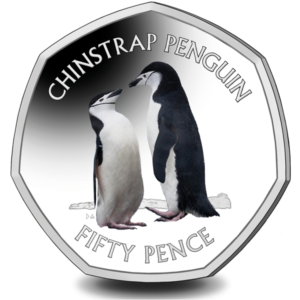 Chinstraps are so called due to the band of dark feathers under the chin which looks like a strap keeping a hat on.

They are also probably the most abundant penguin in the Antarctic region, living mainly on diet of crustaceans and forming a strong bond, returning each year to the same nesting site with the same partner.

The design on the coin features a male and female Chinstrap penguin.