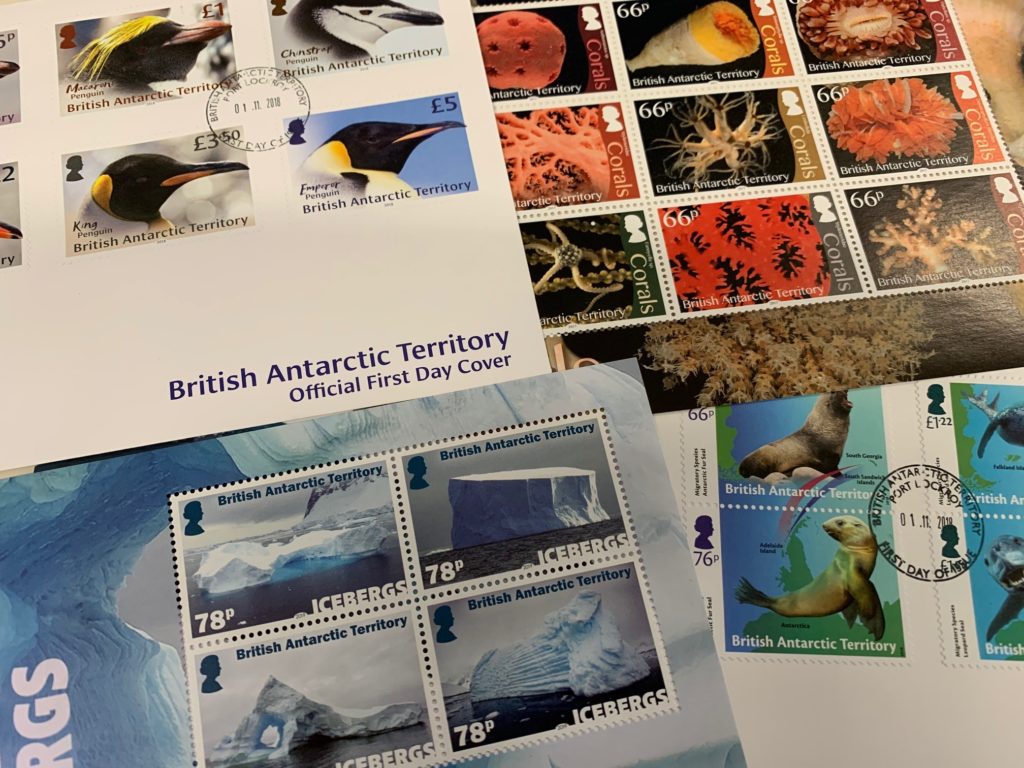 2020 marks 200 years since the discovery of the Antarctic continent. To celebrate, we are running a competition for children aged 4 – 17 years old to design an official postage stamp for the British Antarctic Territory (BAT). The design theme is “Discovering Antarctica”. Four lucky winners will have their very own drawings featured on official stamps.

The closing date for design entries is 12 May 2020. You will need to create your design on the official entry form and send it in with a consent form, which must be completed by a parent or guardian.

Please note that due to Coronavirus (Covid-19) the timetable for judging the competition is liable to change. However, we still welcome entries on the current timescale.

These are the forms you need for the competition:

You should also read the full Terms and Conditions.

The prize-winners will have their design featured in the “Discovering Antarctica” issue of stamps for the British Antarctic Territory. Each winner will also be presented with a framed copy of the First Day Cover (featuring all of the winning stamps) together with two unframed First Day Covers and a certificate from the Commissioner of the British Antarctic Territory.  Winners and runners up will also have their designs put on display.

Did you know: HM The Queen approves all stamp designs for BAT ahead of them being issued!

There will be four winning designs, one from each of the following age categories:

Designs from outside the UK can be considered however, they would need to be received before the closing date.

Read on for more information about the theme of discovering Antarctica...

The possibility that there might be a great southern continent had fascinated explorers and sailors for centuries. In January 1820 expeditions from Russia and the UK sighted the continent of Antarctica within days of each other.

On 30 January 1820, the Irish-born navigator, Edward Bransfield, sighted “high mountains covered in snow”. Three days earlier the Russian Fabian von Bellingshausen had reported “ice mountains” and “continuous ice”. While it remains unclear who sighted land first, the discovery of the Antarctic continent had been made.

200 years ago, we knew nothing about these new lands. We still have much to learn. However, we do know that Antarctica is the coldest, driest and windiest continent in the world. It also has a key role in the world’s climate and ocean systems, which helps in the prediction of global impacts of climate change.

www.discoveringantarctica.org.uk is an award-winning website where you can find out more about this unique continent, including on science and exploration, tourism and how Antarctica is governed. Supported by the Royal Geographical Society (with IBG), the British Antarctic Survey, the UK Foreign & Commonwealth Office and the Government of the British Antarctic Territory, if you are looking for inspiration for your design, this site should have it.

The theme for the competition – ‘Discovering Antarctica’ – can be your own interpretation. It could cover the initial discovery of the continent, modern day discoveries, or discoveries you have made from learning about Antarctic and its wildlife online or on TV.

Some facts about Antarctica:

Antarctica has an incredible environment and is full of life. Several species of penguins breed there, including the iconic Emperor penguin. Other birds such as Snow Petrels, Cape Petrels and Skuas can be found there. Several species of whale and seal also take advantage of the fish and plankton-rich waters. And Antarctic waters are also home to a wide range of corals and sea creatures make their home on the surrounding ocean floor.

The British Antarctic Territory forms the largest and most southerly of the UK’s 14 Overseas Territories. The UK’s claim to this part of Antarctica is the oldest of any made on the continent, dating back to 1908.

In 1959 the Antarctic Treaty was signed. It is widely considered to be one of the most successful international agreements. The Treaty protects Antarctica as a place for peace and science. It also puts all territorial sovereignty claims into abeyance.

The UK has a long and proud history in Antarctica and plays a leading role in protecting and studying the continent.

Our world-class science is conducted by the British Antarctic Survey, who will soon be able to make use of the new polar ship RRS Sir David Attenborough – which some of you will know as Boaty McBoatface! This vessel will conduct vital research in the polar regions and be fully equipped with the latest instruments and improved icebreaking capabilities. This sophisticated vehicle can travel for thousands of kilometres and explore vast areas of the ocean. Who knows what new discoveries will be made.

So do please get involved!

Drop us a line at polarregions@fco.gov.uk if you have any questions.

I have no access to a printer to print out the official entry and consent form.  Can my child still enter?

Where possible we would like entries and consent to be on the official forms.  However we recognise that access to printers may be difficult during periods of self-isolation.  We can accept hand written entries but they must contain the same information that is currenty requested on the official form (i.e. name, age, address, signature of parent/guardian).  Please try to set out entries and consent as close to the official form as possible.  Stamp designs should be contained within a rectangle approximately 16cm by 11cm.

For the consent form, you must confirm you agree to the conditions set out in the official consent form.

We are unable to accept entries electronically.

I am a teacher and we were going to run a competition in our school.  The school has now closed due to Coronavirus.  Do you have any advice?

We are aware of a number of schools who were intending on running internal competitions.  We hope that as part of any home schooling or for parents who need to occupy 4-17 year olds during periods of self-isolation that designing a stamp and making use of all the learning tools on Antarctica – such as www.discoveringantarctica.org.uk – be considered. We recognise that not all entries may be co-ordinated as intended but we welcome individual entries or let us know at polarregions@fco.gov.uk what steps you may have taken which we can share with others.