The Pobjoy Mint series of 50 pence coins featuring historical ships continues with a new coin produced on behalf of the British Antarctic Territory to commemorate the Centenary of the death of famous polar explorer, Sir Ernest Shackleton. 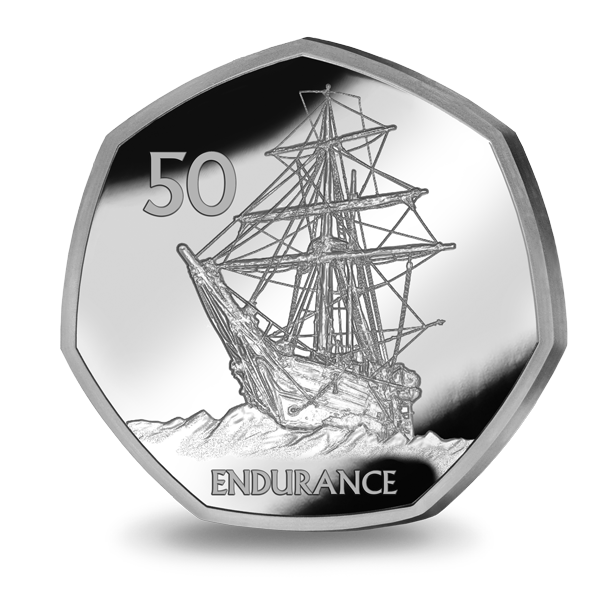 The design on the coin features the Endurance, a three-masted barquentine in which Shackleton sailed for Antarctica on his 1914-1917 Imperial Trans-Antarctic Expedition. The Endurance was thought to be the ideal ship for an Antarctic Expedition as it was designed with great inherent strength in her hull in order to resist collision with ice floes and to break through pack ice by ramming and crushing. The ship was originally built in Norway for Adrien de Gerlache and Lars Christensen, who intended to use her for arctic polar cruises for tourists to hunt polar bears. However, financial trouble led to the sale of the ship to Ernest Shackleton.

Imperial Trans-Antarctic Expedition, also known as the Endurance Expedition, is often considered to be the last major expedition of the Heroic Age of Antarctic Exploration. In 1914 Shackleton set his sights on being the first to traverse Antarctica. After a month-long stop at Grytviken whaling station, in South Georgia, the Endurance sailed into the Weddell Sea with the aim of landing the expedition party near Vahsel Bay, from where they would commence their trans-Antarctic crossing.

Encountering difficult ice conditions, the Endurance became beset in the pack ice of the Weddell Sea, drifting north throughout the Antarctic winter before the ship was eventually crushed and sunk. Her 28-man crew then spent months in makeshift camps on the ice, before they took to the lifeboats to reach Elephant Island. It was from here that Shackleton and five companions made their incredible 1,300 km open-boat journey aboard the James Caird to King Haakon Bay, South Georgia.

After a short period of recuperation Shackleton, Tom Crean and Frank Worsley crossed South Georgia on foot to Stromness whaling station where they arrived on 20th May. Shackleton then began his – ultimately successful – efforts to rescue his men on Elephant Island. After four attempts in different vessels, Shackleton was able to rescue the waiting men, who were brought home aboard the Chilean steamer Yelcho without loss of life.

After being abandoned, Endurance eventually sank into the Weddell Sea, but the exact location has always been a mystery until 5th March 2022 when an expedition aboard S.A Algulhas II named Endurance22 finally located the ship intact and in good condition 107 years after it sank.

The obverse of the coin features an effigy of Her Majesty Queen Elizabeth II produced exclusively by Pobjoy Mint.