The British Antarctic Territory and Pobjoy Mint are delighted to announce the release of the second coin in the new £2 coin series celebrating 100 years since the end of the Heroic Age of Antarctic Exploration. 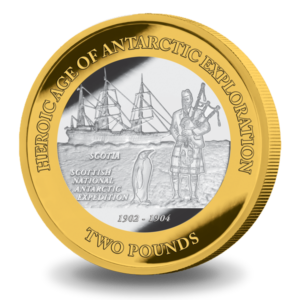 The Scottish National Antarctic Expedition (SNAE), 1902–1904, was led by William Speirs Bruce, a natural scientist and former medical student, aboard the Scotia.  The expedition completed a full programme of exploration and scientific work and its achievements included the establishment of a manned meteorological station, the first in Antarctica. When the Scotia reached its most southerly point on 9th March 1904, the ship was held fast in pack ice for four days and it was during this period of activity that bagpiper Gilbert Kerr was photographed serenading a penguin.

The Heroic Age of Antarctic Exploration was an era in the exploration of the continent which began at the end of the 19th century and ended after the First World War.  Exploration of the southernmost part of the globe had been an off-and-on area of interest for centuries prior to the Heroic Age, yet the sheer isolation of the region, as well as its inhospitable climate and treacherous seas, presented enormous practical difficulties for early maritime technology.

During this Heroic Age, Antarctica was the focus of international efforts that resulted in intensive scientific and geographic exploration by many expeditions launched from several countries.  The common factor in these expeditions was the limited nature of the resources available to them before advances in transport and communication technologies revolutionised exploration.  Each expedition was therefore a feat of endurance that tested, and sometimes exceeded, the physical and mental limits of its personnel.  The “heroic” label recognises the adversities that were overcome by these pioneers.

The design features the ship Scotia in the background and in the foreground is a bagpiper serenading a King Penguin. Issued on behalf of the British Antarctic Territory the coin has been produced in Bi-metal and Proof Fine Silver with Goldclad®. The obverse of the coin features an effigy of Her Majesty Queen Elizabeth II produced exclusively by Pobjoy Mint.