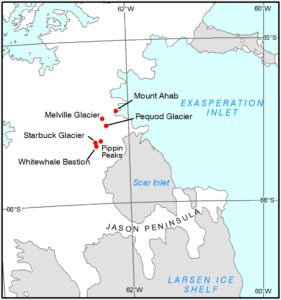 As part of a regular series on the meaning of place names in the Territory, this latest edition focuses on a Moby Dick inspired theme in the Antarctic Peninsula.

August 1st was the 200th anniversary of Herman Melville’s birth. Testament to the variety of themes present in the APC gazetteer, there is a Moby Dick place-name theme in Graham Land, in the northern Antarctic Peninsula. Melville Glacier (62°22’58”W, 65°28’41”S), is named after the famous author. It was first surveyed by FIDS in 1947.

There are several other placenames in the area associated with Herman Melville’s famous novel – if you are interested in learning more, please go to the Antarctic Place-names Committee website.