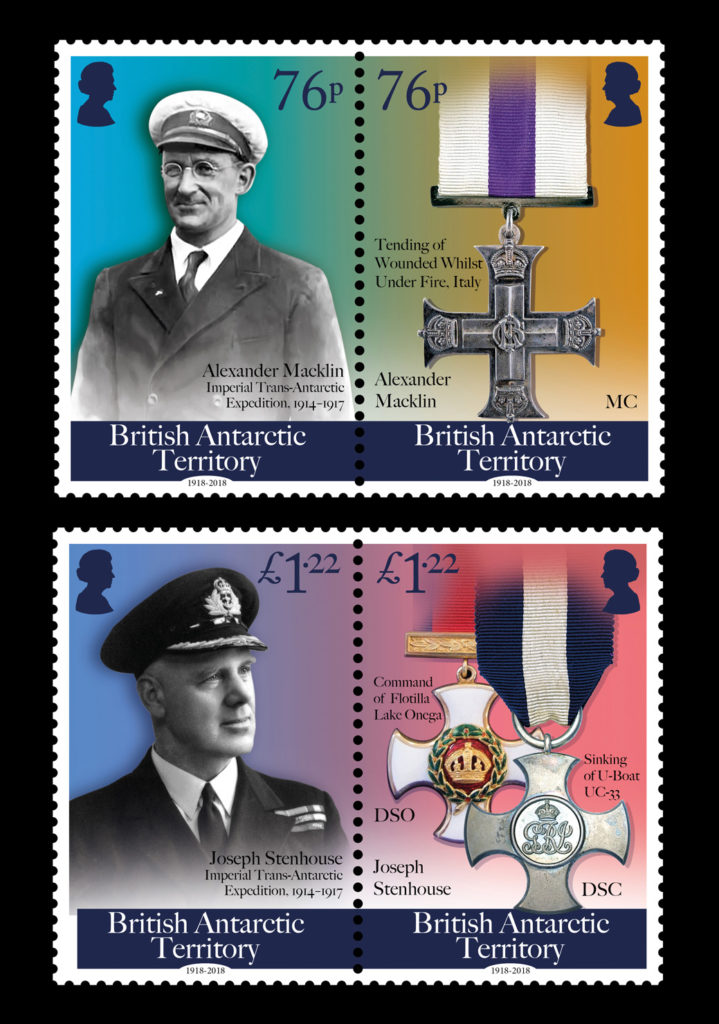 On 4 November 2018 we released a new stamp set to mark the centenary of the end of World War One.

We will be making a donation from any profits to the Royal British Legion, which helps members of the Royal Navy, British Army, Royal Air Force, veterans and their families.

Sir Ernest Shackleton’s plan for the Imperial Trans-Antarctic Expedition was audacious and, to some polar experts, foolhardy. One party, aboard the Endurance, would sail to the southern coast of the Weddell Sea and set up a base with six of the men then setting out on a 1,500-mile journey across the continent, via the South Pole, to another base on the coast of the Ross Sea. On the way they would pick up supplies set out for them by a party from the Ross Sea base that had landed from the Aurora.

Both halves of the expedition faced near disaster. Endurance was crushed in the pack-ice and the crews fight for survival and eventual rescue has become legendary. On the other side of Antarctica, Aurora was trapped in the ice and barely made her way back to New Zealand, having left 10 men stranded ashore. Despite enormous hardships, and the deaths of three men, they managed to lay the depots of food that would have been vital for Shackleton and his crossing party.

The onset of World War I meant that the expedition nearly did not take place. On 3 August 1914, as Endurance was about to depart, Germany declared war on France and Britain mobilised her forces. The immediate effect on the expedition was that three members left to rejoin their units. Shackleton cabled the Admiralty in London offering Endurance and her complement. The First Sea Lord, Winston Churchill, replied ‘Proceed’ and, with the backing of King George V, Endurance set sail for Antarctica on 8 August.

There was criticism at home that Shackleton and his men should be fighting for King and Country rather than ‘messing about on icebergs’. Shackleton countered that they were engaged in the ‘White Warfare of the South’. As proved to be the case, the expedition was sometimes as fraught with danger as facing enemy fire.

When the men returned to civilisation, they found the world was still at war. The war with Germany had been expected to be short-lived but, three years later, it continued to engulf Europe. Almost to a man, the explorers joined the armed forces or returned to their previous lives in the Merchant Navy. Even Perce Blackborow, despite having the toes of his left foot amputated on Elephant Island, joined the Merchant Navy. Some made the ultimate sacrifice for doing so. Tim McCarthy was killed when his ship was torpedoed. Alfred Cheetham and Ernest Wild, Frank Wild’s brother, also died at sea. James McIlroy, James Wordie and Clarence Mauger were badly injured.

At 42 years of age and too old for conscription Shackleton was gazetted as a temporary Major and joined Syren Force, a multinational force sent to Murmansk in northern Russia, first to defend it against the Germans and then, after the Armistice, to support the White Russians against the Red, Bolshevik, forces. His task was to organise winter equipment and he was joined by Alexander Macklin, Leonard Hussey, Joseph Stenhouse and Frank Worsley.

Alexander Macklin was surgeon aboard Endurance and on his return to Britain, he was commissioned into the Royal Army Medical Corps and reached acting rank of major in 1919. He served first with the infantry but transferred to the Tank Regiment. He moved from the Western Front to Italy where he was awarded the Military Cross for bravery in tending the wounded whilst under fire. Macklin volunteered for Syren Force in northern Russia where he was later joined by Shackleton.

Joseph Stenhouse, First Officer of the Aurora, assumed command when the Captain Æneas Mackintosh was stranded ashore at the Ross Sea base. With great difficulty, he brought Aurora back to Port Chalmers, New Zealand. On his return to Britain, Stenhouse, a sub-lieutenant in the Royal Naval Reserve, joined Frank Worsley’s PQ61 as Gunnery Officer. For his part in the sinking of the U-boat UC33 Stenhouse was awarded the Distinguished Service Cross. He joined Shackleton in northern Russia and took command of a flotilla of boats on Lake Onega. For this service he was awarded the Distinguished Service Order.