The British Antarctic Territory is located in the coldest, driest and windiest continent in the world.

It has a unique environment and a near pristine wilderness.  Home to numerous species of fauna, from higher predators such as Killer Whales and Leopard Seals, through to Emperor penguins and albatrosses to smaller species such as krill; there are even a few species of very resilient flora.

We have a duty to help protect this unique but vulnerable ecosystem.

Biodiversity on land (terrestrial) is very limited; there are no terrestrial mammals or trees and only two flowering plants the Antarctic: hair grass (Deschampsia antarctica) and Antarctic pearlwort (Colobanthus quitensis).  The dominant plant cover consists of low-growing cryptogams and microorganisms including mosses, lichens, fungi and hepatics plants, found on ground which is ice-free during the summer months.  There are only two higher insect species. One flightless midge (the chironomid Belgica antarctica) is endemic to the Antarctic Peninsula and South Shetland Islands, while the second, another chironomid, Parochlus steinenii, is Antarctica’s only winged insect. While there may not be much diversity, the population of species can be very high.  Elsewhere, the terrestrial fauna is dominated by a few species of micro-arthropods which are found most commonly in vegetated areas.

In contrast with life on land, the marine diversity is particularly rich.  There are several species of marine birds that forage and use ice-free islands and coastal areas as nesting grounds.  Although penguins are the species most often associated with the Territory, the most common birds are actually Procellariidae (petrels, prions, fulmars).

A number of penguins breed in the Territory, including the Emperor, Adélie, Chinstrap, Gentoo and Macaroni.  There are also Snow Petrels, Cape Petrels, Antarctic Petrels, Antarctic fulmars, Wilson’s and black-bellied storm petrels, Antarctic prions and southern giant petrels. Sheathbills are common scavengers of bird and seal breeding and moulting areas. 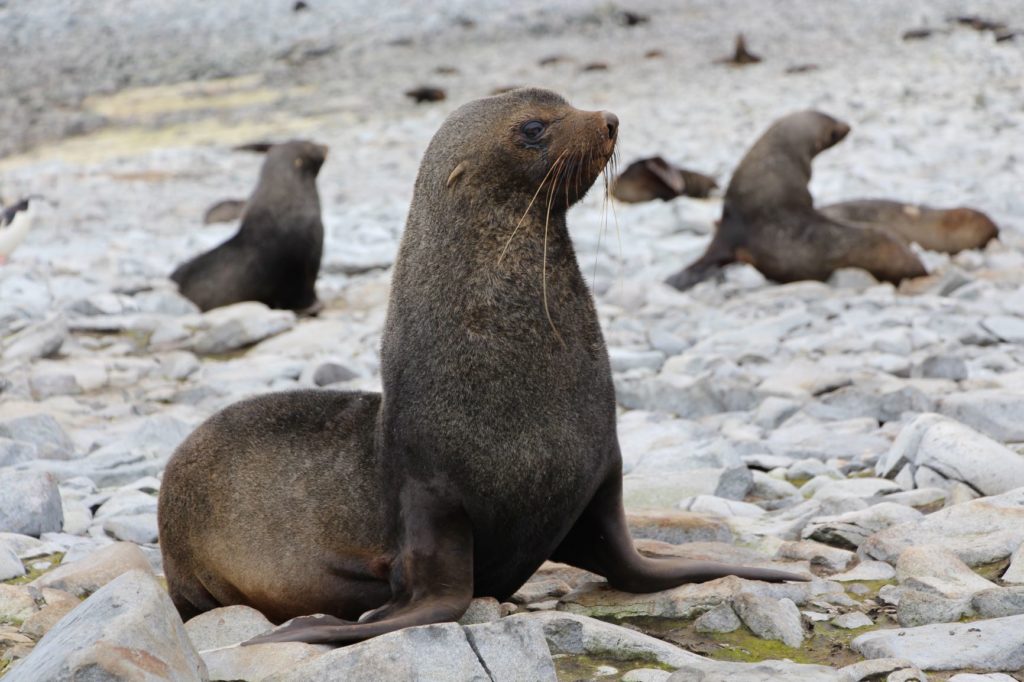